The mountain fire was frightening in Clovelly, Cape Town.  We watched it gnaw its way relentlessly down the slope toward the houses all day on Tuesday 3 March 2015.  It started to take on the persona of a living being, a fire dragon, intimidating us with its crackling and hissing.  With premeditated precision it kept a solid f 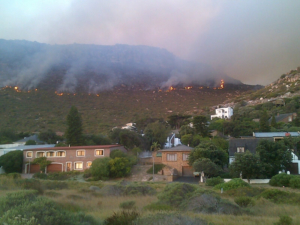 ront of fire – no sections foraying forward nor holding back – just a slow march toward the houses.  A rain of ash and the choking smoke reached far across the valley – a kind of psychological strategy to spread awe and panic over an area far exceeding the reach of the beast.

We watched and waited for helicopters.  There was nothing we could do. Protected by the slope, fed by thick bush and fanned by a strong south-easter the fire had all the advantage.  The helicopters came in the mid afternoon.  Two yellow and one red fire coloured copters.  You could almost feel the tension in the valley ease as the heavy doof, doof, doof of the rotors re calibrated our racing hearts.  Flying in a tight sequence each helicopter dipped to fill its water bucket in a pond on Clovelly Golf Course then circled overhead and flew away….  They disappeared down the valley flying in clear sight of our flame tongued monster to dispense their aid out of sight and where the situation must have been desperate.  With each of their returns we instinctively checked the distance remaining between fire and houses and wondered if there was enough daylight left for our turn. 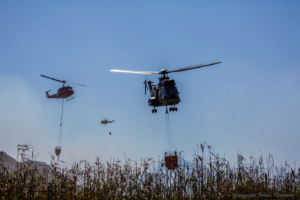 Just before sundown the helicopters tightened their circuit and water bombed the leading edge of `our’ fire.  It was too little and too late.  The fire responded to the sprays of water with billowing white smoke and angry whooshing and popping sounds.  It barely slowed its decent.

Clovelly was unlucky. At the same time the fire was encroaching on us, homes in Noordhoek, West Lake and along Boyes Drive were in immediate danger.   We were also lucky.  The wind died and the fire slowed. 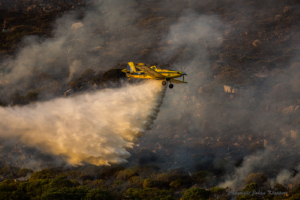 That night the Clovelly Neighbourhood Watch called a meeting at the Country Club and people were organised into teams to support the fire fighters.  Without the day noises to dampen it, the sound of the fire was omnipresent.  But now we could also hear the rumble of the fire trucks stationed along Clovelly Road and see their small, bright red lights.  Each fire storm on the slope re-energized the fire.  At the same time its bright light reflected off the waiting fire engines and cast giant shadows of the protective fire fighters onto the nearby houses.

Deep into the night an especially big flare broke through and headed toward the home of the country club manager at the far end of Clovelly. Its threatening glow lit up half the houses in Clovelly. The dove that roosts under our eve ruffled its feathers in distress, its startled eye a mini reflected fire.  A raging wall of flames dwarfed the house as the fire burnt right up to the fence.  Without the wind to encourage it and faced by fearless fire fighters with concentrated jets of water, the outburst was subdued – for the time being.

It was a very long night measured by the distance between the fire and houses rather than by time.

At 6:00 in the morning when the fire fighters were cold after a long night of waiting for the main assault, the wind returned.  In step with the wind the line of fire reared up and broke through the last of the fynbos in squalls of super-heated air and flying embers.  The call came to evacuate the houses.  Along the fire belt locals were helping the fighters haul the heavy hoses and adding extensions to reach the rapidly changing flares and hot spots.  As the fire in the middle section stalled suddenly the two ends erupted.  Neighbourhood watch radios summoned volunteers to support the fighters above the houses at the golf course end.  At the same time the fire crossed the neck to Trappieskop. With the wind urging it up slope, the fire took off at a speed and intensity that you would only expect in a horror movie.  Nothing in its path had a chance.  With renewed energy the fire front widened and rushed toward the houses above the elbow of Clovelly Road.  Fire trucks raced to the new front and the neighbourhood watch radios directed people to help with evacuations. Those of us further away searched the thick smoke for signs of daylight and the hope of helicopter support. What else could hold back such searing heat and asphyxiating smoke?  Incredibly and once again the fire fighters stood their ground and the fire fizzled under the onslaught of their hoses. 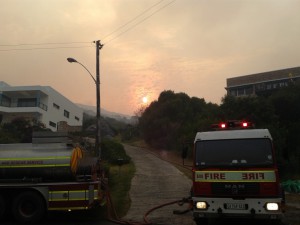 Together we had won. There would be small isolated flares, but the danger was over.  We had been lucky, no one in Clovelly lost their home, no one was injured.  We had experienced the best of human nature.  Fire fighters with courage and a sense of humour even after adrenalin charged action and mind and body numbing 24 hour shifts. Neighbours had pulled together as a concerned community of people showing that we are more than a collection of houses.

The sun rose above the smoky mountain, a glowing red ball acknowledging the passing of another fynbos fire and the start of a new cycle of life. 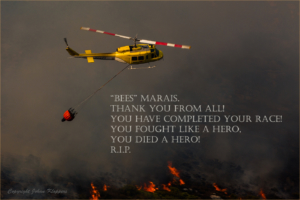 It was with shock and deep sadness that we learnt that pilot Hendrik `Bees’ Marais, veteran of hundreds of fires, had been killed when his helicopter crashed while he was helping to fight a fire at Cape Point on 8 March.

With appreciation to Dr Johan Kloppers for the use of his photos of the helicopters and fixed wing plane.