Snake on beach is rescued in a sun hat!

Home/Uncategorized/Snake on beach is rescued in a sun hat!
Previous Next

Snake on beach is rescued in a sun hat!

A true story about a snake that accepted a ride in a sun hat and got hooked! 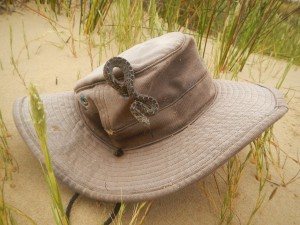 I joined a group of friends on the Shipwreck Trail a multi-day coastal hike from Port Alfred to the mouth of the Fish River (Eastern Cape South Africa). While walking along the beach on the second morning we found a small snake on the wet sand just below the high water mark.  It looked like an adder.  The snake responded to a test tweak of its tail with a hiking stick by rearing its head in agitation. It was alive.

What now? Even small adders are venomous! What was the snake doing on the open beach far from vegetation, safety and presumably lunch?

`Okay snake, ‘ I thought, ‘ co-operate and we can make a plan.”   My husband, Chris gently nudged the snake toward my large sun hat. The reassuring recesses of the hat appealed and the snake darted in and coiled itself comfortably inside.  Holding the end of the long hat band at arm’s length I hot footed it up the beach toward some vegetation. In a well vegetated dune slack, I looked about for a sheltered place to tip out the snake. There! Perfect!

Oh no!  This was supposed to be a co-operative exercise.  The snake, disturbed by the pendulum swing of the hat running up the beach, tried to escape through one of the small round air vents.  I looked in horror at half a snake sticking out of my hat while the other half appeared stuck on the inside.  How had the head and half the body squeezed through the hole?   How was the other half going to follow so that I could have my hat back?

I anxiously sent the snake mental images to breath out and push while feeling increasingly worried that I may have to abandon my hat. It slowly squeezed its full length through the hole.  I stared in amazement as the little snake – but larger in girth than the hole in my hat – headed for a thick tuft of dune grass.

I kid you not – the snake in the hat photograph is genuine.  I belong to the generation that, generally, does not know how to Photoshop!!!  But we are wild about life and not afraid to rescue a lost snake!!

Seems like the snake had the last laugh….. It wasn’t an adder after all.  It was a toothless egg- eater mimicking its venomous cousin!!! (Pers comm snake expert Grant Smith of  www.capesnakeconservation.com/

And what was it doing on the beach – probably looking for sandpiper eggs.