It is not easy unwrapping the competing interests behind the current sorry state of the non- recyclability of our plastic shopping carrier bags.  A see- saw is a sadly apt metaphor for the ups and downs of materials recycling in South Africa. There appear to be three core stake holder groups.   The retailers who buy the shopping bags are the fulcrum of the recycle see saw.  Then there are the bag producers and the recyclers which at the moment appear to be at competing ends.  This should not be. The retailers have the power to set environmentally responsible standards – in keeping with their recycling logos and eco-marketing.  The producers and the recyclers can and need to work together to stop plastic from going to landfill and into the environment.

What is upsetting the balance and why?

The bag producers started adding cheaper calcium carbonate (chalk) to replace some of the plastic (PE-HD polymer) to make cheaper bags.  The chalk compromised the recycling process of the shopping bags from Woolworths, PnP, SPAR, Shoprite and other retailers which most recyclers no longer accept.  It appears that at first the retailers did not know!!!  When the information became public a technical working group constituting retailers, converters / producers and recyclers was convened. Interesting that given the amount of plastic pollution in South Africa, the environment was not represented.  `Industry’ wanted to find a solution and avoid more regulation from the outside. Do the retailers and the plastic bag producers really see the urgency of finding an environmentally responsible solution?  In 2002/3 Min Valli Moosa of Environmental Affairs legislated that the thickness of plastic bags was to be increased from 11 – 13 microns to  24 – 30 microns to make them more economically feasible for the recycling process.  However, because of the chalk additives which makes the bags difficult to recycle, now even thicker plastic bags are going to landfill and the environment – in direct contradiction of the intention of recycling to reduce plastic in the environment.

So what is the outcome of the industry workshop?

According to a spokesperson for PlasticsSA which represents the bag producers (converters) the working group needed to come up with a way forward by the end of June 2017.  The outcome is not yet public knowledge.  A spokesperson from Woolworths reported that the findings would only be made public at the end of July – but in the meanwhile Woolworths was changing the message on their bags from recycle to re-use.  If this is true it does not send a positive message that an `industry solution’ supports a ban on additives to ensure that the packaging is recyclable.  A spokesperson from a recycling company believes they are being pressurized to find a way to recycle the bags with the chalk additive.  This is a sad indictment of the producer’s and retailer’s stance on extended producer responsibility. 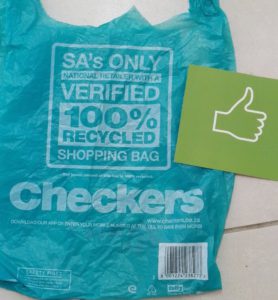 least with regard to their shopping carrier bags. Checkers bags, made by Tuffy are an example of shopping bags made from 100% recycled & 100% recyclable plastic.  Production is being scaled up to include Shoprite shopping bags as well.  This shows that with the correct production, converters and recyclers can co-operate to support sustainable re-use of plastic packaging.

Are our shopping bags just the tip of the iceberg?  Apparently some converters are considering adding chalk to the PE-HD plastic milk bottles which will impact on their recyclability as well.

for background info go to:  https://greenaudits.co.za/recycle-logos-but-shopping-bags-dumped-no-to-bags/