South Africans use billions of single use plastic bags every year.  Plastic bags are just so convenient!  But here is the CON.  Currently most of the plastic shopping bags (PSBs) paid for by customers in food retail outlets in South Africa are not recyclable – even though many have Recycle Me logos.  Checkers is the exception with 100% recyclable bags made by Tuffy. 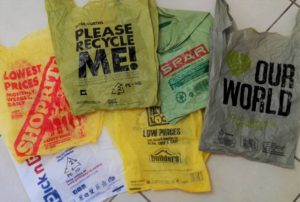 In spite of recycle messages our recycler has to send these shopping bags to landfill..

Most other retailers and certainly Woolworths, PnP, Spar and the MassMart Group are selling customers PSBs with a chalk `filler’ that makes the bags cheaper to produce but compromises their recyclability.  While the retailers claim they only found out about the non -recyclability of their bags at the beginning of 2017 they don’t appear to be pushing too hard to shift to 100% polyethylene bags.  The Retailers Forum and an industry technical working group have debated how to address the non-recyclability of the shopping bags.  Discussions have focussed on identifying the maximum amount of filler (8 – 9 %) to be added without making the bags non- recyclable and pressurizing recyclers to accept PSBs for recycling. Click here for the Technical working group recommendations.  07112017 Press release Working Group Recommendations on the Recyclability of Plastics Products In the meanwhile billions of PSBs are mostly used once and then dumped.  As an interim solution, to avoid being accused of making false claims, some retailers are considering removing the recycling branding.  CONvenient!!

Why is it so hard for the retailers to do the right thing and simply place orders for 100% PE-HD bags made from increasing amounts of recycled PE as it becomes available?  Apparently without the filler the bags could cost between 4 and 10 cents more per bag.  This is a small price to pay to keep PSBs out of the environment.  It is a cost that can be transferred to customers who don’t re-use PSBs or alternatives.  The economic downturn which squeezing retailers to be more careful about decisions that impact their short term finances is no excuse!  What about decisions that continue a legacy of impacting the environment and our own health?

The process of prodding and pushing the plastics industry and retailers to take responsibility for the life cycle costs of PSBs goes back at least to 2000.  Minister of Environment Affairs at the time, Valli Moosa initiated discussions with retailers, bag producers, labour and recyclers to design thicker bags that would be recyclable.  A levy was introduced to support recyclers to collect bags. This triggered retailers to charge for bags at supermarkets, both to recoup the costs and to encourage a culture of reuse, or the use of alternatives.  The levy, 8 cents per bag, was not well managed and simply disappears into government coffers.  Now, years after the deadline to increase the thickness of PSB to 30 microns most PSBs are still 24microns thick and more recently contain a chalk filler of up to 20%.  This makes a mockery of the government intention that PSBs need to be recyclable.   That said, the Dept. of Environmental Affairs has not responded at all to emails dating back to June 2017 calling for a ban non- recyclable plastic bags.

In a growing international move, other nations, most recently Kenya have banned PSB.  This is a drastic step with immediate job losses in the plastic industry although with time jobs, but not necessarily for the same people, will be created to produce alternative carriers.  Banning PSB has an immediate environmental benefit in the reduction of plastic in nature.  But how eco-friendly are the alternatives?   There are serious environmental questions around the production of paper and while paper bags do compost they are still single use.   New `plastic’ made from starch or cellulose that competes with food production raises serious ethical issues.

The responsible and sustainable long term solution must be a move away from all single use packaging.  Now is the time to start with the non- recyclability of PSBs –  our national flower that showcases profit over the planet, and so also over people as our wellbeing is directly linked to that of the Earth.  We need all the retailers to take the CON out of the convenience of PSBs and shift to 100% recyclable plastic.