The City of Cape Town’s proposed Drought Charge is an inequitable and socially divisive solution to the water crisis. Divisive because it targets only a sector of the residential population.  It appears to be an illegal charge as it takes the form of a wealth tax linked to property value and is not based on consumption.  A water availability charge or review of the water tariff structure that prioritizes consumption is not unreasonable. However the proposed Drought Charge is unacceptable as it targets only a sector of consumers, namely so-called middle to upper income rate payers, the same group that recently started paying for the previously free 6000 litres of monthly consumption.  Inflated Cape Town property values means that property value is an inequitable indicator of income and is certainly not a measure of consumption.  Furthermore in the event that the proposed Drought Charge is legally challenged, then the City may not be able to generate the additional income it is looking for to pay for new sources of potable water.  An equitable option linked to consumption needs to be found.

The table below gives an indication of the proposed monthly drought charges (City of Cape Town -published in community newspapers). 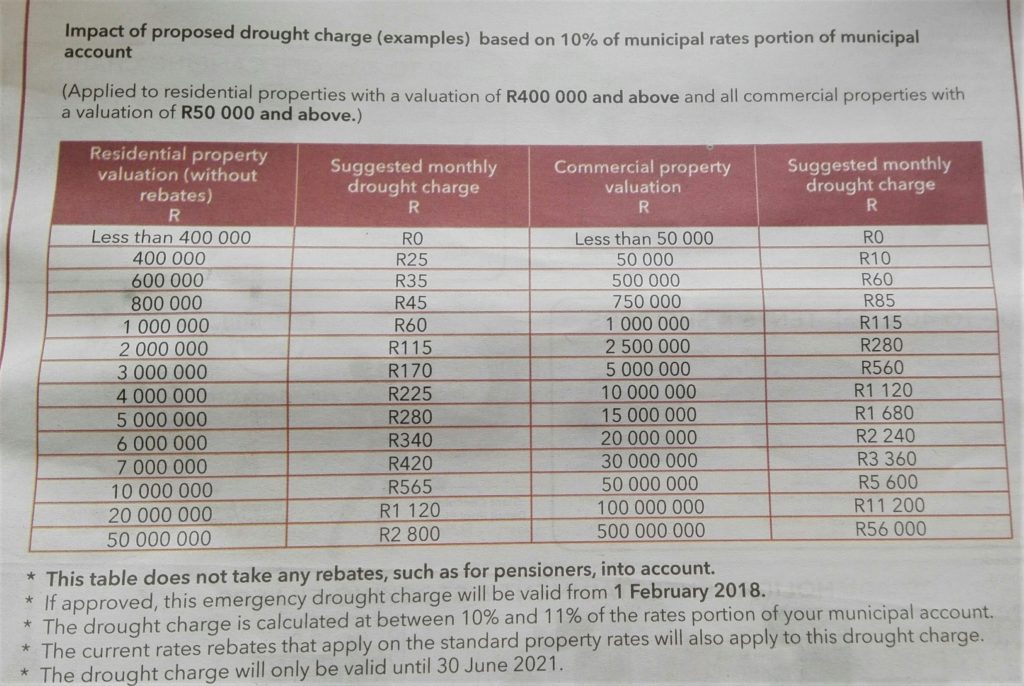 Reducing consumption has to be the first priority.

We hear figures that 36 to 50% of households, presumably suburban, have reduced their consumption to less than the prescribed 87 litres per person per day.  The City needs to deal immediately with the remaining 50 to 64% of households who are still using too much water.  With many Capetonians still using more than the restricted limit of water, Mayor Patricia de Lille announced on Tuesday (9 January) that Day Zero had been brought forward by seven days to April 22.  https://mg.co.za/article/2018-01-09-only-197-of-usable-water-left-in-cape-dams.

The City should already be implementing Phase 2 of the Disaster Restrictions.  This phase recognizes the need to reduce consumption to ensure that the dam levels do not drop below 10% before the scheduled onset of winter rains.  Urgent action to reduce consumption and delay the probability of Day Zero needs to come before considering an additional tax on ratepayers.

Citizens need support for – not drought charges – for private initiatives to reduce demands on potable water.  Funding models or city loans for rain water harvesting need to be considered.

Many households have invested in reducing their demand on the City’s potable water supply by installing rain water harvesting and grey water systems.  The proposed Drought Charge is a slap down to these private initiatives and investments in water saving.

Using our household as an example:  We invested in 21 000 litres of rain water tanks and have replumbed our toilets to use rain water and grey water.  This was an investment over years to avoid a financial and water crisis.  The current value of our rain water tanks, installation and plumbing amounts to R30 000.  When divided into monthly payments to correspond to the proposed three years of the Drought Charge our investment translates into R833 per month. Having invested heavily in reducing our demand on the City’s potable water resource we object strongly to the proposed Drought Charge.

Private boreholes are also an example of investment although controversial because they tap into a common resource and are often not managed conservatively.

Who will own the new City water infrastructure?  Alternatively will the City repay the Drought Charge?  Assuming optimistically that the City will be able to implement significant new infrastructure in time who will own it? The  drought charge is based on the rateable property value and not on consumption and does not acknowledge households that have invested considerable sums in water efficiency and harvesting.  It is proposed to run for 3 years which places the burden on existing ratepayers to fund capital development for all into the future.  The City cannot claim that this is ethical or equitable.  It is a crisis tax to fast track new water infrastructure. This begs the question – how does the City compensate for what should effectively be a loan?  This is an NB issue as it potentially sets a precedent for dealing with any future service crises in a way that is inequitable.  This is made more pertinent by the fact that it is a National Government responsibility to provide sufficient potable water resources.

It does appear that the water tariff is low and needs to be reviewed!

A public participation process is needed to look at appropriate creative solutions including  funding models, shared use and management of `private’ boreholes and city wide water harvesting initiatives.

Is there a limit to growth in Cape Town based on water availability?  The City is ignoring this question?  Approval of development on a third of the PHA, an important aquifer and local vegetable basket, does not engender confidence in the City’s understanding of future water needs or sustainable development.  Reduced access to water also threatens local food security.  In addition, the Agricultural Water share from dams that also supply the Paarl /Stellenbosch/ CT Metro etc. is to be drastically cut.  The farmer’s response (heard on Cape Talk) is that for them to stay economically viable they need to focus on high value crops – presumably the ones that yield an export return rather than basic vegetables for locals.  So no water and now less food and less jobs as well.  Assuming that water demand is going to continue to place pressure on supply – even in a non-drought year because of the City’s population growth – then Philippi ground water and vegetables are a strategic asset.   Remember Chief Seattle who prophesied that we can’t eat or drink money!

Finally, ratepayers are potentially going to be faced with the double impact of the Home User Electricity tariff and the Drought Charge.  The Home User Electricity tariff of just over R8 per day was scheduled for implementation on 1 July 2017 but then postponed.  It now appears as an item on the rates accounts of households valued over R400 000, albeit as a nil charge.  As the Drought charge is proposed for 3 1/2 years till 30 June 2021 it is likely that the Home User Electricity Tariff will be implemented during the duration of the Drought Charge. These combined charges amount to a considerable increase in overall property tax for the affected households and will place an especially challenging burden on middle income households and pensioners.  This reinforces the need for a new approach to charging for services and certainly a new and mutually beneficial relationship between city and citizens.

Your concerns and objections can be addressed to drought.charge@capetown.gov.za until midnight on 15 January 2018. For general queries phone the City call centre on 0860 103 089.

On 19 January 2018 the City Council resolved not to implement the Drought Charge.  More than 61 000 comments were received.  On 19 February 2018 City emailed its feedback on the comments and objections as follows.

Given consideration to the comments received, Council agreed that:

After considering the comments received, above resolution was confirmed at the Council meeting held 31 January 2018, together with the approval of level 5, 6 and 7 water and sanitation tariffs with effect 1 February 2018, which involves higher payments based on consumption from the lowest level of water use.

The following deductions were made from the comments received:

Ratepayers were opposed to:

Ratepayers made the following recommendations