A Saudi sabbatical – the desert within and without

A Saudi sabbatical – the desert within and without

Visiting Chris in Saudi and enjoying time out from environmental activism – which was starting to feel more like shifting the deckchairs on life boat Earth rather than being part of a change in course – came at the right time.  Also, a welcome escape from the infighting within the Beloved Country as Ramaphosa’s restructuring is increasingly hijacked by short term popularism.  Just as well that I was ignorant of the irony of moving from a personal hot spot to living closer to pressure cooker Syria with its global military consequences!

Living behind high walls in the bubble world of a housing compound in Riyadh with trees, plastic grass and 24/7 aircon provides an opportunity to catch up on reading, reflection and real time out. Going out is a very different experience. There are few challenges for Chris as a male foreigner, apart from a significant language barrier.  Oh, and, even as a left hander he has to eat with his right hand in public, to avoid attracting enough evil eye to give him indigestion.  Chris has been courteously accepted somewhere into the middle of the patriarchal hierarchy and has been invited to coffee and dates by new friends.  It’s some consolation for missing his favourite SAB brew. I am proud to report that unlike some of our boytjies, who won’t adapt to dry, Chris has not, yet, taken to making wine from Ceres fruit juice which is readily available in Saudi supermarkets.

If you think that driving in Cape Town with our taxis is training for Saudi, forget it. This is next level madness.  We are too new to understand, but it seems that for many Saudi men, turning the key of their huge 4x4s also ignites fuel injection testosterone.  Red lights mean cross the intersection faster. A four lane highway means stay in your favourite lane till the last 10 meters and then cross all three to exit.  The most stressful for us, in our modest sedan while battling with the street names which are mostly Sultan Bin Saud Fahad Abdul Fasil etc, is that by the time we have got to the etc part of the name we are about to miss our exit ramp. As big vehicles don’t let the little ones in we regularly over shoot.

For me going out is an exercise in serial culture shocks. Realistically I can’t go out without Chris as my escort.  But as `out’ for most women appears to be vast shopping malls, I would prefer to stay in. The shopping complexes are dominated by retailers selling expensive western style clothes, jewellery and cosmetics.  Groups of shadow women in black abayas either with thin, see through, black veils covering their entire faces or with a slit for their eyes troll through the shops. As these are the only women one sees they must be buying the clothes.  It’s a mystery, this desert with a dual life within and without. 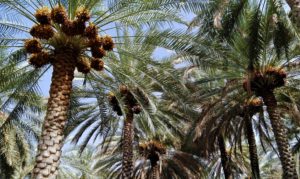 When I go out I wear one of two abayas with a head scarf. My beautiful French blue abaya from an Islamic outfitter in Cape Town is desperately hot. Once inside the malls the aircon is a life saver but walking outside in the 40+ heat is sheer endurance.  My other abaya is a thin navy cotton tunic that Chris bought for himself in Egypt years ago.  Its cooler, so I shortened the hem to wear it.  Just in time, as we went to visit two famous date markets on the weekend 300+kms north of Riyadh and everything was outdoors. However, the hem circumference is too small for my natural stride, so to stop myself from tripping, I take small steps and now have the precarious gait of an old Chinese woman with strapped feet.  Eish! When no one is about I hitch the thing to knee height so that I can make some distance.  I need to unstitch one of the sides before I fall down some stairs in a crowded place.

You don’t want to know the details, but one of the worst things about an abaya is going to a Saudi toilet with floor awash with water and no hook for a handbag.  I had my abaya wrapped as high as I could hold it, bag hanging from my neck and simply ran out of hands for anything else. Then realized that in my rush to escape the heat outside I had forgotten to bring my own paper. (Beam me up Scotty – I want to go home). How Saudi women have allowed themselves to be so inconveniently wrapped and for so long is another mystery?

While the abayas and the turbans and tunics of the men create an aura of anonymity in public places, the Saudi men and women we have met on overnight hiking trips and at yoga are some of the warmest, most hospitable people you are likely you meet anywhere. That men and women attend our yoga class together and in tights, shows that Saudi’s at heart are people like us. Except that the social boundaries between inside and outside life are rigid. Like the desert which looks barren above but hides wealth and life below. 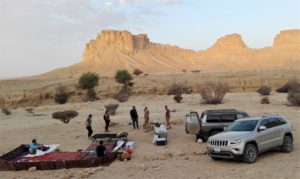 Camping is very popular in Saudi and is allowed anywhere outside the cities and towns.  Chris and I decided to camp in the desert during a weekend road trip to the famous date markets in Qassim.  4×4 tracks criss-cross much of the little that we have seen of Saudi and sadly, shockingly wherever people stop they leave litter. The oil under the ground is being replaced with plastic above.

Camping equipment is big here as comfort is key. The selection of cooking equipment, camping LED lights and carpets to sit and sleep on needs to be seen to be believed.  Chris bought a 2liter`pot’ with lid carved from a block of soap stone.  It is a copy of a traditional stone age pot from Yemen and makes delicious veggie potjies.  We set off with modest equipment, without the Persian carpets, and drove into the desert to find as private a place as our sedan could reach.  A crusty track between the dunes led to a small dry salt pan – perfect except for the 38⁰C heat at 19:00. 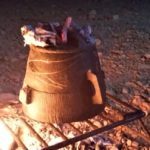 Saudi sunsets are a soft dusty yellow – not the blood red exodus of an African sun. There is no Milky Way here and only the brightest stars twinkle through the dust. Not unexpectedly there were few signs of life apart from camel tracks, goat droppings and a few scratchy shrubs.  The only birds were a late evening fly past of four Namaqua doves and a solitary crow.  With our campfire cracking under the veggie pot Chris and I settled down to listen for desert sounds, while trying not to think how a cold beer would turn pleasant into perfect.  Then the first 4×4 arrived.  We heard the engine screaming long before the multiple headlights blinded our shadow patch. The vehicle stopped momentarily in a cloud of dust, headlights highlighting my legs, now in shorts, and with revving as if a land cruiser could swear it raced straight up and over the dune next to us.  For the following hour at least 8 more 4x4s roared up and over the dunes around us like giant fireflies.  A group  clustered on top of a distant dune, spilling out young men who set themselves up for an all-nighter with bright LED lights, male banter, lots of coffee and more litter.  As the sky started to lighten before 5:00 we were woken by engines screaming and the race back down the dunes – into what kind of a day!

Remember the story of the Pilansberg bachelor elephants.  In an experiment that involved relocating young elephants to populate new reserves, a group of youngsters were separated from a Kruger herd and resettled in Pilansberg without their extended family or other adults to teach them social skills. The young elephants grew into social delinquents.  When the rangers realised what the problem was, adult elephants were introduced to re-establish responsible behaviour.  While I am not suggesting that these 4×4 crazy Saudis are wild elephants, although at 5:00 I was thinking of worse metaphors, nevertheless I wonder about the psychological consequences of the excessive male dominance in Saudi social structure.