Home/Celebrating Sustainability, Featured/Mother’s day reflections- the future of our children and the Earth
Previous Next

Today on Mother’s Day in Cape Town, a sunny autumn day full of birdsong and late harvest vegetables waiting to be picked, my thoughts are drawn to the Mother of all – Mother Nature. What future awaits my children, nurtured to the best of my ability on a Planet compromised by human demands?

We are part of the magically complex web of life that provides the essential raw materials for our material and spiritual wellbeing. With luck or blessing, we have evolved to enjoy the Earth’s abundance across the entire planet!  This does not give us diplomatic immunity. Treating Mother Nature as a storeroom of raw materials for our exclusive use is likely to get us expelled, like the kinder garden bully who won’t share the toys.

Bio-diversity scientists report that the Earth is going through a mass extinction of species including key species from sharks to insects which keep the ecosystem in balance. This mass extinction is caused by the global scale destruction of habitats, the rampant exploitation of living resources and by Climate Change which results in a higher frequency of severe droughts, storms, flooding and wildfires.  Mother Nature has already experienced five mass 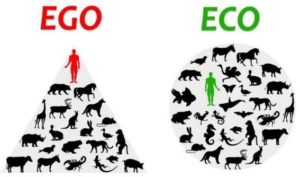 extinctions, most famous, the extinction of the impressive dinosaur dynasty. Previously, the distant ancestors of mankind managed to wriggle through and evolve further to become the dominant dynasty that humankind is today. Along the way we harnessed the power of fossil fuel energy and fast tracked technical inventions to build a world focussed on material possessions. Along the way, we forgot that we are dependent on other Earth kin and certainly are no longer kind. We shifted from Eco to Ego beings.

As our children are increasingly confronted with their options for survival in the face of Climate Change and the sixth species extinction, they face two fundamental challenges: size of the human population and the high material demands of our civilization. On a positive note, as human activities are creating the imbalance between demands and resources, then surely we can also fix it.

Young Climate Change Champion, 16-year-old Greta Thunberg,  stopped going to school because she says there is no future with the current education and socio-economic system.  She is lobbying for “system change, not climate change”.

Current human generations are actively seeing the impacts of our lifestyles and economic systems in the loss of natural habitats, the extinction of pollinators and key food species such as fish, increasing toxic chemicals in our soil, water and air, polluted rivers and groundwater and plastic everywhere. These impacts are speeding up.

In my grandfather’s time, when crayfish were so abundant, they were considered poor man’s food. He could easily collect enough for supper by reaching under rocks at low tide, without getting his feet wet. Today they are a luxury served in upmarket restaurants, or you need a boat to get to where there may still be a few small crayfish. My mother used to return from the local grocery shop with bunches of vegetables in paper bags. Now the streets, rivers and coast are littered with plastic food and beverage packaging. I used to hear the call of the coucal (bird) along our neighbourhood stream. The coucal has not called in years, but all too often the stream is poisoned by sewage spills.

Think back to your own youth! No matter how old you are you will have experienced some loss in the ecological integrity of your local environment and a reduced quality of your food, water and air. These personal experiences are supported by the Report on the State of the Ecosystem, 2019, by the Intergovernmental Science-Policy Platform on Biodiversity and Ecosystem Services which identifies habitat loss and resource exploitation as the top two threats to our life support systems.

Unlike the slow creep of the eco-impacts that we are adjusting to but not fully acknowledging, the droughts and storms associated with Climate Change are overwhelming in their devastation. They refuse to be ignored and are already displacing people and resulting in starvation and increased outbreaks of disease. The World Economic Forum, which quantifies financial impacts, lists Extreme Weather, Failed Climate Mitigation and Natural Disasters as the top three global risks for 2019.  Are big business CEOs and Investment houses listening? Are we still supporting and investing in businesses that are compromising the future of our children?

If there is anything good about human induced Climate Change it is the undeniable clarion call for a change in our economic system and in people’s lifestyles.

History tells us that humankind is often at its best and its worst during times of competition for resources. A wake -up that moves society to a better place, rather than to deepening conflict, will be a true test of our humanity. As soon as we ack 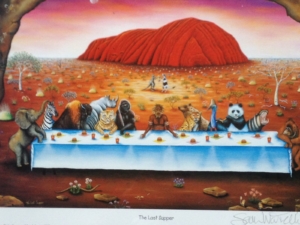 This is where we need the voices of people committed to co-operation, inclusive solutions and living with respect for the web of life. Voices that speak to preserving the best in humanity. Interesting that one of Google’s synonyms for compassion is humanity?

Painting: The Last Supper. It is their Earth too!

Humanity needs to `Power Down’ their egos and their demands!

It is imperative to recognise that the high energy density of fossil fuels  that powers the technical advances we enjoy today also allowed many people to live with huge and unsustainable material footprints. This lifestyle is still an aspirational goal for many. Fossil fuels have  supported a far larger human population than would have been possible without the medical, agricultural, industrial and transport technologies they power. With or without timeous agreements to reduce the use of fossil fuels, they are a non-renewable resource which will be depleted. Soon is not too soon, to avoid the worst Climate Change predictions and to shift to lifestyles that restore rather than deplete.

The other important acknowledgement is – the transition to less energy dense renewable alternatives will require that people `power down’ their energy use and general level of consumption. With 7 billion plus of us on the planet, this will be a positive step toward living in balance with the Earth’s ability to satisfy the needs of all of us.

Strong lobby groups with vested interests challenge the link between fossil fuels and Climate Change and dispute the need to `power down’. They argue that doing so will lead to massive economic disruption and to large scale unemployment. Not doing so will continue the high level of environmental damage and provide fewer life sustaining eco-services such as clean water, air, fertile agricultural land etc. Still others promote high energy density alternatives such as nuclear power or future high density energy technology breakthroughs.  Simply plugging in a new energy source without reducing our other resource demands is not going to avert a collapse in the web of life that supports us. New energy dense technology can’t replace depleted ground water, provide new topsoil, or bring back commercially extinct fish, to name a few examples.

`Power down’ is sold by the business as usual cabal as a big sacrifice. However, people in communities who are shifting to cleaner energy, food gardens, shared transport, education that supports entrepreneurship, exchanging services and co-operation in a supportive society that values each other and the natural environment are freed from the weight of material demands and are enriched by a real sense of belonging in a community of care and co-operation.

Clearly, resistance to change is not for lack of knowledge. We have so much information about the plight of the planet and the risks.  The stakes are high with vested interests resisting change and confusing the messaging.  A lack of courageous political leadership results in tension and inertia around how to transition to low impact living.

Final Fact: the cost of shifting today to an economy based on clean production, less material products, co-operation and valuing Mother Nature will cost far less than the ultimate price of the large scale loss of life and the destruction of a healthy environment that will be paid by our children if we do nothing.

Sir David Attenborough narrates a call to action. Watch The Truth About Climate Change – BBC Documentary (2019)
Climate change is now affecting every country on every continent. It is disrupting national economies and affecting lives, costing people, communities and countries dearly today and even https://www.youtube.com/watch?v=xTgmxV7Ui3Q

Comments welcome.  They add value to the discussion.  Scroll down past images if you want to leave a comment.