Home/Blog, Celebrating Sustainability, Featured/What are your Green New Deals in 2021?
Previous Next

It is the 21st year of the 21st Century and time to wonder if humanity is finally ready to grow -up and own a different destiny. What kind of Green New Deals do you want?  Those that acknowledge our role as co-creators in an evolving natural world – or a continuation of creative destruction?  For years I have wrestled uncomfortably with the stories of mankind’s fabled uniqueness and separation from the natural world. We share Mother Nature’s building blocks with common genetic material. Yet we believe we are a special species above the web of life.

Today modern science is unravelling a new understanding of an inherently interconnected natural world within which we are embedded both physically and spiritually. So many of the talents we believed were unique to humans are shared by a host of other species.  Many mammals recognise themselves as distinct individuals and use sophisticated communication to organise their social structures. Many animals use tools, demonstrate advanced conceptual thinking and problem solving, even so called pests such as rats and crows. A wood wide web of plant roots and symbiotic fungi shares nutrients between plant species to ensure long term survival of a forest community. Their co-operative strategy is an advanced lesson for human survival. Where mankind is unmatched however, is the scale of our modification of the natural world, effectively making us co-creators of life on Earth– or perhaps more accurately creative destroyers.

Plastic pollution, water pollution, Climate Change, species extinction (particularly evident in the reduced species of fish we can eat), human population pressure, etc. is finally awaking us to the scale of our imbalance with the natural world. Increasingly people, governments, political and community leaders and companies are acknowledging the need for a new green relationship with Mother Nature!  2021 is the start of the United Nations Decade on Ecosystem Restoration (2021-2030) which challenges everyone to massively scale up restoration efforts to resuscitate our degraded ecosystems. Addressing the WWF on 2 December 2020 UN Secretary-General António Guterres stated: “making peace with nature is the defining task of the 21st century.” And there is hope demonstrated by nature’s resilience itself.

So, what kind of Green New Deals do you want?

“Go Green this Black Friday!”  What does this headline say to you?  Carry on buying stuff. It is okay!  It is green!  Really!! Isn’t this the same old story of stuff, now with a green cover.

Everything we buy and consume, green products too, are made with water, energy, and raw materials.  These resources are ultimately limited – including productive land for food!  Yet, we are not alone on this `goldilocks planet’ with conditions exactly right for life. We compete aggressively for resources with the rest of Nature. This is the saddest irony, as human wellbeing is directly dependent on the wellbeing of Nature.  Now, through the fog of confusion that Covid 19 induced, key truths are emerging.  We too are nature and vulnerable to inter species infections. Our health is dependent not just on the material provisions of Nature but on spiritual ones as well. Locked in isolation away from natural areas, even local beaches and parks has added significantly to people’s distress. Thirdly, the return of wildlife to `human territories’ and the clear skies over previously polluted regions are indicators of Nature’s resilience.

While the Earth’s resources are limited in relation to the growing material demands of a growing human population, human compassion and appreciation have no limits, other than our reticence to use these values as a lens when we consider the impacts of our consumption.

This begs the question of all of us: What are you mostly, a consumer or wanabe consumer who values material things – OR someone who is enriched by relationships with family and friends and connection with creation.  I use the word creation here, instead of Nature, to acknowledge an evolutionary process that goes beyond a material interdependence of species to recognise a spiritual connection with Nature that is essential to human wellbeing.

Consumption is a law of Nature. It is the scale and type of consumption by too many humans that is creating disconnection and chaos. Too many of us are trapped in the Dominant Social Aspiration (DSA) that consumption makes you happy and gives you social power. This DSA is actively branded and promoted by the political ideology of an economy based on material growth. Material growth is still justified as providing jobs for all. In spite of new efficient technologies, there are still finite resources on Earth which sets a physical limit to material growth. Faint calls of “there are no jobs on a dead planet” are still drowned out by a “Go Green this Black Friday!” mindset.  Even worse, economic growth is used to justify the theft of resources from `other’ communities and countries leading to the growth of the massive military industrial complex. Not only has militarisation destabilized communities around the world, but ongoing military expenditure is diverting resources from wellbeing and personal growth.

So where does the Green New Deal come in and who is in charge?  A common solution supported by big business and governments is greener production and greener products. Clearly there is good in this, but not when it simply shifts the focus of consumption instead of reducing consumption.  Again, we have to ask ourselves: have we abdicated our individual responsibility to change our behaviour in favour of clean, efficient technologies that will reduce the impacts of our consumption? What is the optimal balance between behaviour and genuine green products and services that are needed rather than wanted?  Clues can be found in who and what is driving the process – conscious and compassionate consumer demands or businesses looking to grow a new material market?

Consumption choices are difficult.  Our supply chains are complex with many products containing multiple ingredients. Ideally, we want to consume food that is local. We want to use products made from renewable and re-usable materials, and importantly that do not add toxins to the environment. This means being far more conscious in our choice making.  This means a much stronger lobby for honest product labelling so that we can make informed choices. Easy `green’ choices may not be good green ones!  Consider these examples with no simple answers:

Some argue that individual efforts at reducing consumption, improving efficiency, and reducing waste are like moving the deckchairs on the tired Titanic – a futile distraction. They insist that individual actions are a dead end and we need to focus on changing the economic system of material growth, excessive profit seeking and marketing of unsustainable aspirations. Not entirely true, as the sum of  individual actions can have immediate results, while changing the socio-economic system is a long term challenge.

By shifting to local is lekker, by developing and using eco-friendly technologies and behaviours we are learning about and building resilience from the ground up. Communities that embrace these visions and values are becoming exploratory and experiential models for sustainable livelihoods that all can learn from. The Transition Town movement is a case in point. What if enough of us valued companionship and community over stuff and status? What if enough of us focused on wellbeing over wealth?  We could crash the current system and drive a green new deal that meets human needs in balance with Nature’s.

Enough of us shifting to living lightly may be the fastest way to force change.  Our money system running on debt needs material growth to keep feeding it. It is now so entrenched and so complex that in all likelihood it has captured even the vested / elite interest groups who thought they were in control. Our political leadership is not stepping up to challenge of curbing debt nor a materials based economy running out of resources. Fixated on the short term, they do not have the skills to co-create a new socio- economic order focusing on restoration of the natural environment and on human wellbeing. So we are on a runaway train that is running out of track. But, building resilience with eco-sustainable choices, community by community will slow the train and give us time to create new systems in balance with Nature’s ability to provide for humanity’s needs not greed.

We have become a bipolar species rooted in nature but wooed by the superficiality of stuff. The biggest challenge is shifting our dominant values from competition to co-operation, from over- consumption to growing compassion. Be part of a real green deal. Join the 2021 ecosystem restoration push to reconnect with the community of life. 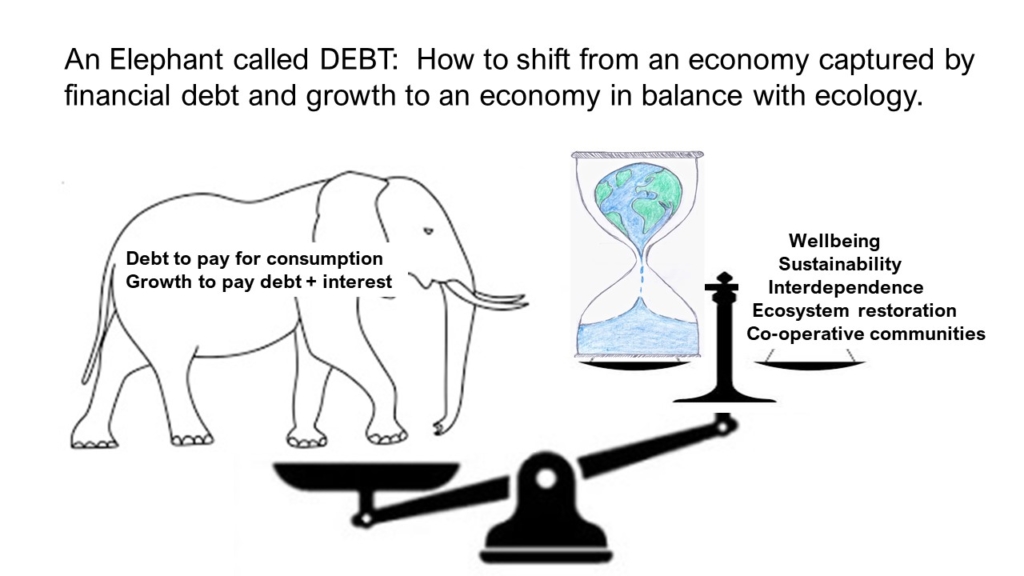